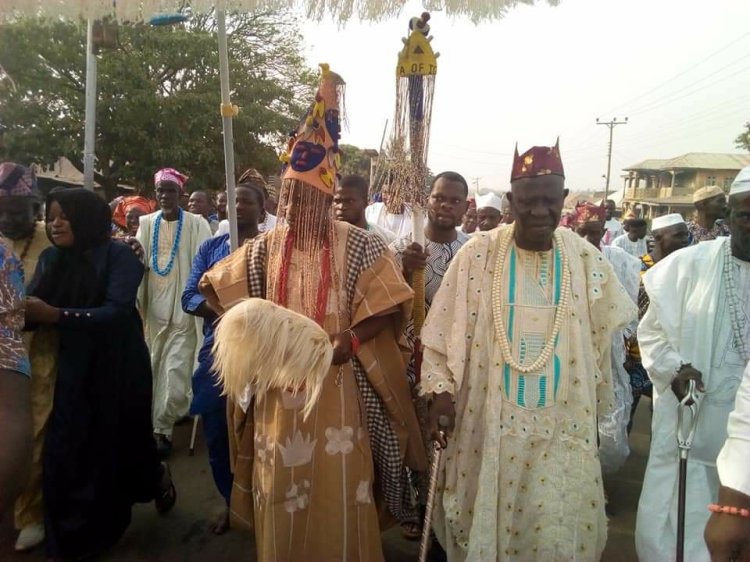 The origin of Igboho started with the migration of Gbage from Ilesha. There was a chieftaincy tussle then, where the younger brother of Gbage was installed as the Owa.

The (aggrieved elder) brother left the kingdom to give peace a chance. That senior brother that left the palace of Owa was called Gbage Olabinukuro and founded his own village called Ebiti. All his supporters, including hunters, followed him to this new abode.

At that period in Yoruba history, there was Fulani invasion of old Oyo Empire. Alaafin Ofinran and his people were forced to vacate their home. When Alaafin got to Ebiti, he met Gbage who had migrated from Ilesha. Alaafin Ofinran saw that Gbage was a powerful man who had a lot of charms and was very formidable in the act of warfare and hunting. Alaafin Ofinran was so amazed that the settlement was relatively peaceful and calm. He then inquired who was the head, usually called Baale and Gbage was called to meet with Alaafin.

When they got to a river (Sanya) after Kishi, one of the wives of Alaafin gave birth to a baby boy named Tella Abisipa, that is, a child that was born on the path.

When they got to the middle of Igbo-Oba which is still named so till date, the oracle told them that was the place they were going to stay. As the herbalist was making divination, two birds were fighting on a tree under which they all sat, the two birds fell in front of the herbalist, one was Igbo bird (Eye Igbo), the other one Oyo bird (Eye Oyo). The two birds were killed and their blood used as a sacrifice to Ifa.

From these two birds Igbo and Oyo, the name Igbo-oyo was formed and it later became Igboho. It was at that place that Alaafin Ofinran was said to have been buried. After about four Alaafin had died in Igboyo; Tella Abisipa that was born at the bank of River Sanya (who had become the Alaafin) said he wanted to return the seat of governance of Oyo Empire back to Oyo-Ile.

However, the Oyo-mesi did not want him to go back, therefore, they took some of the deformed/disabled persons in the palace to Oyo-Ile and when Alaafin’s emissary got there, they (the disabled) chased them away pretending to be spirits with a warning that ‘this place is not your home go back’, until Alaafin sent Alepata and his hunter-like, Akasa, Okere, Emo and Iloko to go and unravel the mystery of the spirits.

The arrival of Alepata (back to Igboho) with all those so called spirits made the Alaafin to change his name from Gbage to Alepata and ever since then, they referred to Alaafin Abisipa as the king that arrest spirits ( Oba-Amoro)

Alaafin Abisipa eventually left for Oyo-Ile with all his entourage while Alepata and his hunters accompanied him. They were in Oyo-Ile for about three years when crisis erupted in Igboho, Alaafin now told Alepata to go back to Igboho to become their leader and ever since then Alapeta have become the head of Igboho till date.

Robert Smith (1965) Alaafin in Exile: A study of Igboho period in Oyo history. The journal of African history.